Last night I was messing around on the computer with my three year old granddaughter, playing around with Bembo’s Zoo. We were having a fine old time when Brooke asked if we could make our own animal out of letters! After a little head scratching I opened up Microsoft Publisher and we started to play.

We clicked on the Word Art icon and Brooke carefully typed in each letter from the word ‘elephant’; putting each letter as a separate piece of Word Art. We did this until we had a lower and upper case version of each letter. Then Brooke decided which letters looked most like ears, a trunk etc. and we moved letters around the page accordingly, resized them to fit our needs and used the flip and rotate tools when necessary. When we needed extra letters we just used copy and paste. Eventually the letters looked like this… 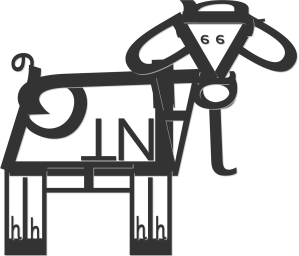 Pressing Ctrl and A together, to select all the individual letters,  we then grouped all the letters together. Brooke thought it would be a good idea to make them all grey (like an elephant)! To complete the project we just right clicked the grouped items and saved the creation as an image.

We used different fonts to create a few more animal images. The introduction of a different colour for some elements really gives the giraffe  (the font used was called Juice ITC) an extra something and on the lion (which, let’s face it, has very few letters to play with) we used a free font called ‘Furry’ to give it an extra dimension. And, just in case you were wondering, the elephant was made using Sassoon font! 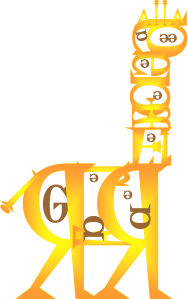 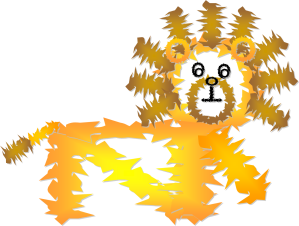 Leave a Reply to Fun with Words « TechnoStories Cancel reply

Runner up in our category!